Democracy the best form of government

Hello friends, hope you all are well. I have come up with the second part of the topic “Democracy the best form of government.” 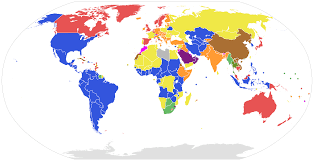 In the previous part, we have discussed a lot about democracy; now we will get to know how you can call democracy better than other forms of the Government.
Therefore, the different types of government are:-
So, let us discuss them in a bit of detail.
ANARCHY: It is a type of government, in which absolute freedom is given to an individual, regarded as the political idea, in the absence of any type of rules and regulations. In this, therefore, one can do anything of its own which is totally an absurd idea; one can even kill his son and wife and no one could even stop him!!!!!!
MONARCHY: You can relate to it as the kingship. A monarchy is a form of government in which a single person holds supreme authority in a ruling country. Monarchy is being followed in many parts of the world like the GREAT BRITAIN. The kings may opt only for his advantages, not for the people of his country, or, the next king will only be elected after the death of the current king and the next king chosen for the throne will be the king’s only son. He would not be judged by his skill, he would be made a king because of his birthplace.
TYRANNY: It is the form of the government in which the ruling party is in the hand of an individual who has seized the control. Its disadvantages would be similar to that of Monarchy.
TOTALITARIAN: It is the form of the government in which, the ruler has the full and complete control over the lives of its citizens and does not permit political oppositions. There is no respect of the citizens as all they are like the robots handled very cruelly by the ruler, each and every activity is under the record of the ruler. It’s a very brutal form of the govt.
OLIGARCHY:; It is a type of government in which the power is held by a small group of people. Its disadvantages may be similar to that of monarchy that small group of
people may not pay heed to the citizens.
FEDERATION:; A group of organisations, states, etc,. Those have united to form a larger organisation or government, is called a federation. This is a relatively better form of government than others but the rules and regulations so made is rigid and can’t be changed. This may cause a bit of problem, as rules cannot be modified for the betterment of people if the situation demands.
THEOCRACY: It is a type of government, which is controlled by religious leaders. It may not be very well appropriate the religious leader may not obey whatever he promises, he may get money minded and start exploiting its citizens.
COMMUNISM: The belief in a society without different social classes in which the methods of production are owned and controlled by all its members and everyone works as much as they can, and they receive whatever they need, is called communism.
This is surely a good form of govt. This feature is available in democracy with lots of new things that communism don’t have.
REPUBLIC: A country without a king or queen, usually governed by elected representatives of the people and a President.
Democracy also has the above-given feature in it.
DEMOCRACY
It is the best form of government, until now. A democratic country suffers a lot of problems but it is still better than all the above-listed forms of the govt. It is not a magical solution to all the problems but still better than others. It is rigid as well as flexible. The citizens of the country have real power. All the citizens of the country choose their representatives by voting. Voting is really a lengthy process, but it permits the decision of the citizens. If the representatives do not follow or obey whatever he promises then the citizens will not vote for him in the next election i.e., 5 years later. This was the minimal feature of democracy, a good democracy can even result in achieving far greater heights. No country is capable to be called a good democracy. Still poverty, improper education, corruption, malpractices, smuggling, trafficking, etc. The citizens must do some positive and force their representatives to take positive actions. “Nothing is perfect in the world, one should try to improve and modify them the thing to make it better and suitable from time to time, as time never stops moving and one should keep up with time.”
Share on Facebook Share
Share on TwitterTweet
Share on Pinterest Share
Share on LinkedIn Share
Send email Mail